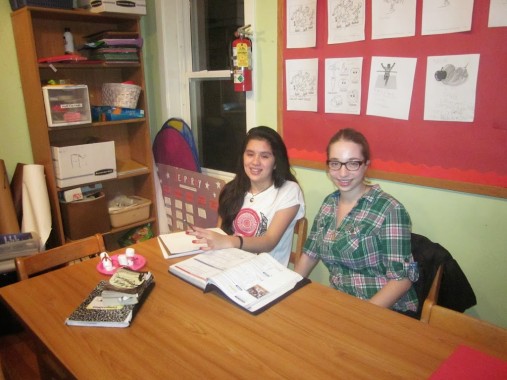 Zoe, a recent graduate of Francis Parker School in Chicago, wrote the following Senior Colloquium Story about her experience as a tutor at Family Matters. Thank you Zoe for volunteering your time and for sharing your reflection with us!
Family Matters, the organization through which I began tutoring this fall, always smells like popcorn.  The building which was likely once a condo on Marshfield in the North of Howard neighborhood is distinguishable from the outside only by the small green sign posted beneath the second floor windows; there are still small kitchens on every floor, which I walk through once each week to sign in before beginning my sessions with Melissa.  Everywhere, children are running.  Some hold books, others munch on the popcorn that is perfuming the building, and others still untie their shoes, placing them in small cubbies in a practice that is both practical, preventing Chicago schoolyard slush from wetting the floors, and further perpetuates the homey feeling throughout the building.  Keri, one of the directors, greets kids by name, asking about how their days were, asking after their families.
On the day of my first tutoring session with Melissa, an eighth grade girl described as “on target” yet “wanting support,” Keri greeted me with the same warmth with which she greeted her students.  She and I had met the week before for a tutor orientation, and I was already familiar with her blond ponytail and friendly glasses.  She introduced me to Melissa, who had been coming to Family Matters herself for years, handed me Melissa’s binder, and led the both of us to a small room on the third floor that was to become “our space” for the next year.
Once alone, I began asking Melissa a series of questions suggested as “ice breakers” in the binder.  Though she was shy, discussion of our favorite foods (“ghetto fries” and Tim Tam cookies are Melissa’s favorites, which, though I promised her I would in October, I have yet to try) and favorite classes soon loosened conversation.  We quickly did away with the binder’s suggested conversation topics, opting to casually ask questions of each other about our families, our summers, our extracurricular interests, etc.  She asked me questions about high school, both social and academic.  That day, we did none of her homework.
Of course, our sessions following were more serious.  I kept in touch with Keri about Melissa’s progress via a GoogleDoc, and Melissa and I worked weekly on her reading assignments, on geometry and algebra, and on vocabulary.  I shared with her games I had played in my eighth grade English class to learn vocabulary, running across the room with a fly swatter to whack the word on a window that corresponded with the definition read by our teacher.  We struggled together over math problems, and I tried in vain to describe what exactly a derivative was when asked what I was doing in my math classes now.  We read through Harper Lee’s To Kill a Mockingbird, a book I hadn’t read since I was 12, and pieced together motifs that came up throughout the book.  (I also gained, while working through To Kill a Mockingbird, a greater appreciation for my English teachers and their ability to filter through spoilers; when I accidentally referenced too early Scout’s meeting Boo Radley, Melissa’s confused expression indicated that I had to quickly backtrack.)
Alongside helping Melissa with her schoolwork, I also helped her write her application essays to Chicago high schools.  This was particularly poignant work for me, as I myself was working on writing application essays to colleges.  The both of us worked to condense our complete selves into several printed pages, discerning the most insightful ways to answer vague prompts like “Tell us about an aspect of your identity” and “What matters to you and why?”
Now that I have enrolled in college and Melissa has been admitted to Senn’s rigorous International Baccalaureate program, our mutual focus has turned to our impending graduations.  We have discussed, in many of our recent sessions, how we feel about leaving the schools and communities in which we have grown up.  We’ve talked about our excitement, about making new friends, about reinventing ourselves, and about having the opportunities to take classes and get involved in extracurriculars that we’ve never even heard of.  We’ve also talked about the fears we have, worries that coursework will be too hard, or worries that we won’t be able to keep in touch with old friends or won’t make lasting new ones.  Both Melissa and I have attended the same schools with the same few people since we were four years old, and both of us feel nervous about leaving the communities we have become so deeply entrenched in.  And yet, as I will remind Melissa today, May 14, at our final tutoring session, I know that the both of us will succeed over the next four years.