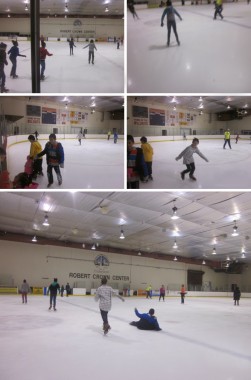 On non-holiday days off of school, Family Matters offers full-day programming to students. Field trips are a favorite on these full days, and our January 24 field trip to Robert Crown was a crowd-pleaser. This was the first ice skating experience for nearly all of the students. Guest Writer and Photographer Shavon, who is a 3rd grader in the Family Connections program, summarizes the day:
On Friday, we went on a field trip to Robert Crown Center in Evanston. First we put on our ice skates. Then we all went on the ice. At first, everybody fell down. But afterwards, everybody ice skated and had a lot of fun. Danny said,
“I was nervous when we started because I kept falling and I didn’t know how to skate. But when we left, I was sad because i was learning a lot and didn’t want to stop.”
After ice skating, we went to McDonalds to eat. Then, we went to the field house to play dodge ball. At the end of the day, everyone went home happy.
Thanks Shavon for being our on-location reporter!

In May, Northwestern University’s Theater Department hosted a unique performance entitled How to End Poverty in 90 Minutes (with 199 people you may or may not know). The show was an experiment in dialogue, in collective decision-making, in shared responsibility and in the potential for how art could make our world a better place.
The audience’s involvement was integral to the trajectory of the performance, since they were to decide how to give away $1000 from that night’s box office to fight poverty most effectively in the Chicagoland area. In an effort to ensure that a multitude of voices were present in the audience, Northwestern invited organizations with a particular stake in the conversation to attend.  Family Matters’ Teen Programs attended the show, and were the youngest contributing members of the audience. They were deeply engaged in the process.
Using debate, audience members – including FM teens – attempted to convince and cajole other audience members to vote in one of five categories: Daily Needs:  Direct services that provide basic needs like food and shelter; System Change: Lobbying for legislation, advocating policy change, and taking action for social transformation; Education:  Promoting access and building resources toward better institutions and systems of learning; Making Opportunities:  Long-term approaches to economic and occupational stability through training, micro-loans, and personal development; or Individual Need:  Through a local organization called Benevolent.net, individuals are able to support a specific person or family and their self-reported immediate need.
After participating in this innovative performance and lively debate, the audience decided the most effective method to end poverty was through the creation of opportunities.  Youth in the audience were joyfully surprised when the show’s facilitators revealed that Family Matters would be awarded $1000 because of the work that we do! Thank you, Northwestern University Theater Department, for offering such a unique approach to discuss solutions on a critically important and complex topic.  We are very grateful we participated and very appreciative of the monetary gift that supports our work in the north of Howard community!