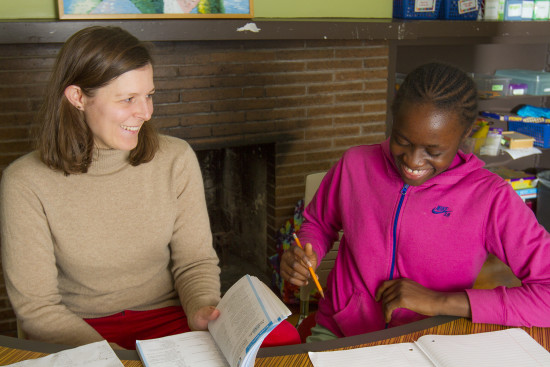 In 2006, Gretchen signed on to idealist.org, looking for an opportunity to tutor in the Chicago area. She had no idea that, almost a decade later, she would still be riding the train to Family Matters every Thursday evening.

For Gretchen, Family Matters is more than just a tutoring organization. It is a community, the source of numerous new friendships, and a place that has felt like “home” for nine years.

It is also the spot that has given Gretchen the opportunity to get to know Arin, a sixth-grader at St. Mary of the Lake who Gretchen describes as smart, hard-working—and just a little bit sarcastic. In the four years that Gretchen has been tutoring Arin, the pair has worked on everything from vocabulary words to science experiments. Gretchen has been impressed by the breadth of Arin’s intelligence, her analytical skills, and her willingness to learn.

But it’s the time that Gretchen and Arin have spent just hanging out that Gretchen has enjoyed the most. Gretchen constantly shows up to Family Matters with something new in her bag: Boggle, art supplies, the ingredients to make homemade biscuits. Arin says she likes working with Gretchen because of her fun personality and sense of humor. Gretchen similarly appreciates how much Arin makes her laugh.
“I just really like working with Arin,” she says, explaining that her reason for tutoring is pretty simple: “It makes me feel happy.”

And although Gretchen has seen a lot of exciting developments over her nine years at Family Matters, her favorite thing about Family Matters is that it still feels like the same place she found on idealist.org nine years ago. “It’s a home, it’s a community, and that hasn’t changed.”