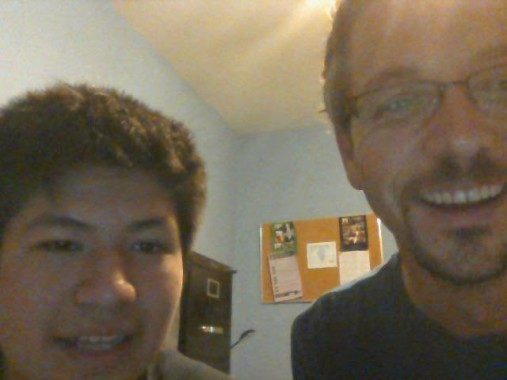 Brad Schwarzhoff shares a story about helping students through the Evening Tutoring program at Family Matters.

For the past few years, I’ve been working with my student Jaime during the evening tutoring program.   During our weekly sessions, I often share my knowledge of technology with Jaime, whether it’s adding some memory to a computer, learning the basics of programming, or most recently, fixing a tablet computer.

I’ve gotten to know Jaime’s family since I’ve been his tutor, including Jaime’s brother Marino, who is also a student in the evening tutoring program.  Jaime and Marino were lucky enough to obtain their own tablet computers through a program at their school. On one sad December day, Marino accidentally dropped his tablet and shattered the screen.

A month later a replacement screen was ordered and we spent a Saturday afternoon fixing the tablet.

Following along with the video, we took apart the tablet, replaced the screen, and re-assembled the tablet. We ran into a couple of challenges along the way, persevered, and were triumphant in the end.

Through some hard work and perseverance, Marino and Jaime learned how their tablets are assembled, and learned how tablets work internally. As a result, they have additional pride when using their tablets.  I learned that it can be more fun to to fix a tablet when you’re teaching someone how to do it.  (A pointer for those of you who may also have a cracked tablet or phone screen – there’s a wealth of information on the internet, including videos that will show you how to do almost anything you want to do, including fix your own electronics.  Be brave and give it a try!)

I’ve now been tutoring at Family Matters for over 7 years.  It has been, without a doubt, the most rewarding experience that I’ve ever been a part of.  It truly is a wonderful organization, and I highly recommend getting involved.